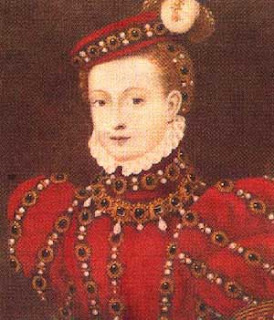 Mary Stuart, Queen of Scots was at odds with her Tudor family from the day of her birth. Proclaimed queen of Scotland when she was less than a year old, she also had a strong claim to the English throne. Her mother was Henry the Eight’s sister. When first Edward, and then Mary Tudor died, the English throne devolved to Elizabeth, but her mother’s marriage to Henry had already been annulled and her legitimacy denied by the English Parliament. At the end of his life, Henry had tried to fix the problem by unequivocally stating the line of succession in his will, but that patch was too little too late.

Thus the stage was set for a battle of wills between these first cousins, both of whom were reigning queens. Unfortunately for Mary, Elizabeth had the upper hand. England at the time was more prosperous and more populous. It was strong militarily and had the advantage of a centralized government that made its sovereign less dependent on her conniving Lords.

Mary, on the other hand, was consistently undermined by the Lairds and even faced down open rebellion more than once. It was clan politics and petty power struggles that led to her beheading, more than anything else. It also enabled Elizabeth to establish her preeminence.

One of the major sanctions that Elizabeth imposed upon learning that it was Mary’s intention to marry again, was a demand that she have a say in the selection of husband. And this is where Elizabeth’s world began to dissolve into fantasy. When asked whom she had in mind, she actually suggested that Mary marry Robert Dudley. Elizabeth’s favorite courtier, and a man most assume to have been her lover. The gossip was as rife then as it is today, and Mary was more than offended at the suggestion, but for political reasons acted as if the match might work.

But Elizabeth’s delusions seemed to know no bounds. It seems she regretted her suggestion, but could hardly tell Mary not to marry Dudley when it had been her idea in the first place. Her solution? She sent a letter to Mary, with the proposal that, once married she and Dudley should move to England and live with Elizabeth! Elizabeth would, of course, support them. 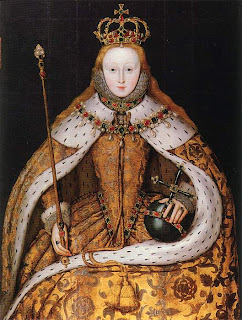 Can you imagine such a proposal made to a reigning monarch? Not only was she supposed to leave the governing of her country to others, in order to mooch around Elizabeth’s court, but she was also, apparently supposed to share her husband with her first cousin. Yikes! I guess no one ever accused Elizabeth of not being a gutsy broad.

Needless to say, this bit of fantasy on Elizabeth’s part was not fulfilled. Mary went on to marry an Englishman with a claim to the English succession that nearly matched her own. An alliance that produced an heir, but eventually led to her downfall.

Posted by Lisa Karon Richardson at 4:03 AM

I wonder if I'll ever understand all the intrigue of the Tudor court. I'm listening now to The Boleyn Inheritance. The switching back and forth between Henry's 'religion of the month' alone is cause to make anyone crazy.

Elizabeth is a fascinating subject. Interesting how she and Victoria, the other long reigning royal female left huge legacies not only for the British Empire but for the whole world. I wonder how much longer Queen Elizabeth has to go to surpass their years on the throne?

Aw, Deb the unending, vastly complicated, intrigue is what makes the Tudors so fascinating. RIght Shmologna!?

As a Cdn, I've always been intrigued by the British monarchy. Considering we flew the British flag until 1965 when we rec'd our now recognizable red maple leaf one, I should be really up on British history. And I am to a certain extent. But sometimes I think I paid more attention to the books and lessons on American history... the colonial period, the pioneers and the Old West... than I did for a country 'across the pond'.